Vietnam has been experiencing a digital wave in its financial and banking industry, with payments through mobile banking services surging by a whopping 144% per year over the past five years, experts said at a conference last week.

During the conference on digitalizing the banking industry, held in Hanoi last week, Pham Tien Dung, director of the State Bank of Vietnam (SBV)’s payment department, cited data from an SBV survey released earlier this year, noting that banks have been heavily investing into digitalizing their services and operations. By the end of April this year, 94% of local banks had invested in digitalization, of which 42% considered digital banking to be the top priority in their business strategy. Over the past three years, Internet banking services in Vietnam have accelerated by 6.3 times. Many banks want to seize the opportunity and modernize their business models. Examples include LiveBank, an automated banking system in Vietnam, and VPBank, which has been leveraging digital banking platform Timo to provide financial services to younger demographics. In September, VPBank launched its own stand-alone digital bank called YOLO that comes with traditional banking services like savings accounts, and loans, but also daily services such as taxis, movies, hotel bookings and food and beverage orders. The idea behind YOLO is to offer a digital ecosystem with diversified services combined with a bank. In addition to mobile payments and online banking, Le Minh Hung, governor of the SBV, reported to the National Assembly during a Q&A session on November 1, that transactions using point-of-sale (POS) machines and inter-bank electronic transactions have also increased remarkably in the past years. Experts said the development of Internet banking, digital payments and advances in biometric technology have helped the banking industry bring new and convenient services to customers, and help them reach sustainable growth. They also noted fintech’s potential to improve financial inclusion. Mobile wallet developer OnOnPay targets the unbanked population in Vietnam’s third-tier and rural areas. ViettelPay, the new digital wallet arm of the eponymous telecom firm, hit two million users in just four months of operations and has gradually served those in “rural and mountainous areas.” Viettel’s entrance into the digital payment space demonstrates a broader trend among Vietnam’s telecom firms which have been rapidly entering the space. Telecom firms’ wide reach means that financial services provided by these could potentially cover 100% of Vietnam’s population. Vietnam central bank pushes for digital payments and banking. Nguyen Kim Anh, SBV’s deputy governor, cited the regulator’s willingness to help develop a favorable environment for fintech innovation. “The SBV pays special attention to fine-tuning the legal framework, building and promulgating legal regulations and orientations in order to enhance the development of information technology infrastructure and security for the banking industry,” Anh said. The SBV has also set up the national inter-bank electronic payment system (IBPS) and the national credit information center, which have been operating smoothly, he said. Governor Hung noted that the SBV has issued 10 circulars on promoting non-cash payments and ensuring security and safety of payment activities. The SBV has also launched a joint program with Vietnam Television called Smart Money and Wise Children to raise public awareness about financial services. Earlier this year, Vietnam’s prime minister approved a project submitted by the SBV for a new digital payments platform, mainly targeted at payments for public services such as taxes, electricity, water, tuition, hospital fees, and social and public welfare programs. According to Allied Market Research report, the Vietnam mobile payment market is projected to reach US$70,937 million by 2025, growing at a CAGR of 18.2% from 2018 to 2025. The market was valued at US$16,054 million 2016. Near-field communication (NFC) transactions are expected to witness the fastest growth as Vietnam has been investing in digital infrastructure and digital payment services, including NFC payments. The report notes changes in customer preferences, surge in need for immediate transactions, increased penetration of Internet and smartphones, and growth of the e-commerce industry have been the major drivers of the market’s growth. Though there is no official report from the SBV, service providers estimate that 10 million people in Vietnam are using digital wallets, a modest figure compared with the great potential of the market. Some of Vietnam’s most notable digital and mobile payment platforms and startups include MoMo, 123Pay, Mobivi, NganLuong, and Payoo. Digital wallet providers have recently started diversifying their offerings, introducing services such as loans. In October, MoMo joined hands with Shinhan Bank to enable users to apply for loans from the South Korean bank through the MoMo digital wallet. MoMo claims to be serving some five million users. GrabPay on the other hand integrated Moca as a cashless payment method in their app. Grab basically did that as they needed a licence and Moca was one of this vietnamese mobile payment licence holders. 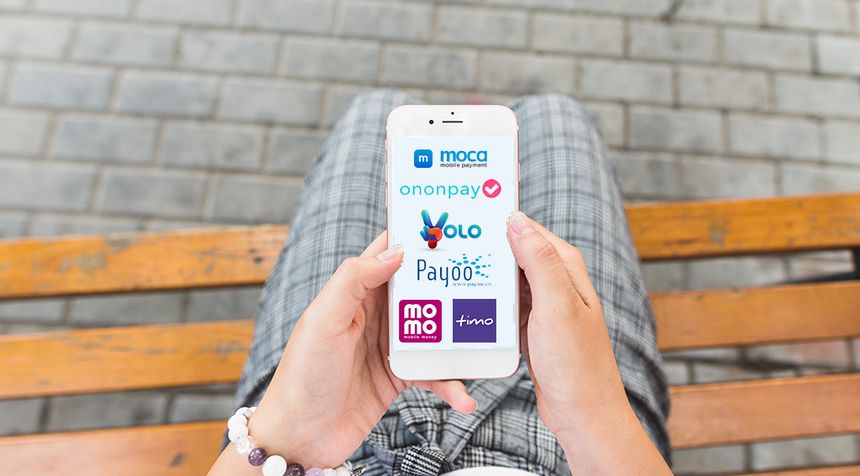 In Vietnam payments through mobile banking services surging by a whopping 144% per year over the past five years!!#fintech #innovation #startups #mobilepayment #ecommerce #vietnam https://t.co/tu2tNIX8nE pic.twitter.com/O3x2QEsb4g