In tech and startup circles, Indonesians are often associated with the “underbanked” buzzword. The country’s economy is still very much cash-based. Many Indonesians don’t have bank accounts, but those who do opt for interbank transfers – as opposed to credit cards – as their main mode of non-cash payment.

One answer to that seems to be e-wallets – apps that let users store money and make transactions digitally. Indonesia’s mobile penetration rate is high, but unlike its neighbor Singapore, for example, major financial players like Visa and Mastercard don’t have a chokehold on the local payments ecosystem. This results in a payments space that’s ripe for disruption.

In terms of basic features, there isn’t much that differentiates many of these e-wallets. Most of them let users store money electronically and tap them for transactions like transferring funds or making payments for bills, ecommerce buys and digital goods purchases (such as phone credits or prepaid electricity tokens).

The best e-wallets are integrated into a vast ecosystem, whether by teaming up with offline merchants or establishing exclusive partnerships with companies that have a large user base – like Ovo with Grab and Tokopedia, or Dana with Bukalapak. Those aligned with a ride-hailing service (Go-Pay and Ovo) have a clear advantage because of scale and transaction frequency. The same goes for those aligned with an ecommerce giant (Ovo and Dana).

The battle is far from being won. As these players aggressively widen their reach, it’s not uncommon for Indonesians to have multiple e-wallets on their phones. Therefore, they can take advantage of whichever offers the most incentive – usually in terms of cashback – at a particular merchant.

To date, there are 37 e-wallet operators licensed by the Indonesian central bank, 10 of which started operations in the last year.

Go-Jek and Grab are not categorized under finance apps. But if they were to be included in the analysis, their monthly active users (MAUs) would have been first and second respectively, above Ovo.

Dana’s founder is Vincent Henry Iswaratioso, formerly the country head for China’s Alipay in Indonesia. The startup leverages Alipay technology, though it’s unclear if Alibaba is involved any further than that. Dana’s primary investor is the Indonesian media conglomerate Emtek Group.

According to App Annie data, the Dana app is ranked third in Indonesia based on MAUs. It also serves as the e-wallet for ecommerce marketplace Bukalapak, another Emtek portfolio, and is accepted on BlackBerry Messenger, whose consumer edition is developed by Emtek.

Key differentiator: Dana is the only one of the top e-wallets to have direct links to Alibaba Group, though interestingly, it did not lead to a partnership with Alibaba-backed Tokopedia.

Go-Pay is the native payment feature embedded inside the Go-Jek app. Initially used for transactions within the Go-Jek ecosystem, it is now accepted offline – for a total of 300,000 participating merchants.

Among the unicorns, Go-Jek was an early mover into digital payments, snapping up payments firm MVCommerce back in 2016. This gave Go-Jek the crucial e-money license from Indonesia’s central bank, which has so far eluded the likes of Grab, Tokopedia, and Bukalapak.

Key differentiator: Being integrated into the Go-Jek app means it has exclusive purview over most transactions in its super-app services, including ride-hailing and the Go-Food food deliveries – competing only with cash. Users can also top up their Go-Pay balance through a Go-Jek driver (users pay drivers cash, while drivers transfer the amount from their own Go-Pay balance), which is an advantage that other e-wallets don’t have.

It also doesn’t hurt to be an early mover in the space, giving Go-Pay an early advantage in terms of brand recognition.

After seeing the private sector’s dynamic expansion into digital payments in Indonesia, four state-owned banks and Telkom – the country’s largest telecommunications firm – merged their mobile payment services into a single platform called LinkAja. Along with regular payment services, LinkAja is expected to also go into services like insurance.

LinkAja was only launched in March 2019, but its most prominent predecessor is Telkom’s T-Cash app. According to App Annie data on fintech apps, T-Cash was ranked second in Indonesia based on MAUs, after Ovo.

Key differentiator: LinkAja has automatic access to its parent companies’ huge user base. Telkom’s subsidiary Telkomsel (in which Singapore’s SingTel has minority ownership) is the biggest mobile telco in Indonesia, while Bank Mandiri – another LinkAja parent – is the largest bank in Indonesia.

According to App Annie data, Ovo is the top fintech app in Indonesia by MAUs. (Side note: Go-Pay, which is not a standalone app, is not part of that list.) The e-wallet, initially developed by the Lippo Group conglomerate as a rewards app, is reportedly accepted at more than 500,000 merchants.

Ovo, whose CEO is former GrabPay head Jason Thompson, is also part of Grab and Tokopedia’s ecosystem in Indonesia. After failing to secure licenses for their GrabPay and TokoCash e-wallets, both unicorns partnered with and ultimately invested in – Ovo.

Key differentiator: Ovo had a head start in acquiring offline merchants. Being linked with the Lippo Group conglomerate gave Ovo access to Lippo’s shopping malls (with its merchants) and its Matahari department store chain, among others. Being a standalone app, unlike Go-Pay, also makes it easier for Ovo to scale its user base by working with other companies like Tokopedia.

One of Indonesia’s newest e-wallets, ShopeePay is backed by regional ecommerce giant Shopee (of course), and is affiliated with fellow Garena subsidiary AirPay. Unlike other e-wallets – and perhaps because it’s new – ShopeePay can only be used for transactions within Shopee for now.

Other players in the payments ecosystem

Jenius is a digital banking product from Indonesia’s Bank BTPN, which recently merged with the local arm of Japan’s Sumitomo Mitsui Banking Corporation (SMBC). It also allows its users to apply for a Jenius physical debit card – without having to open a bank account. It also offers savings schemes akin to a bank account, with interest that can reach 5 percent per annum.

In terms of payments, users can use Jenius to top up e-wallets including Go-Pay, Ovo, and LinkAja, as well as for bill payments. Using the Jenius app itself for payments is more limited compared to e-wallets, but using the card would give you wider options.

Moka, which develops point-of-sale software, is one of five fintech startups in Indonesia that raised a series B round last year, bagging US$24 million from Sequoia Capital, SoftBank, and East Ventures. Its past investors include Go-Jek backer Northstar Group and Singapore’s Wavemaker Partners.

More than 12,000 merchants across Indonesia use Moka, according to the company, and it caters to a variety of businesses, including retail shops, convenience stores, and restaurants. The software also accepts payments by Ovo and LinkAja.

Payment gateway startup Xendit has Silicon Valley credentials: CEO Moses Lo has a master’s degree in business from the University of California Berkeley MBA, the company is a Y Combinator alum, and one of its investors is Accel Ventures (an early-stage investor in Facebook and Dropbox). The company also raised both seed and series A funding from East Ventures.

As seen above, the unicorns – both Indonesia’s and Southeast Asia’s – are well represented, though in varying degrees. Go-Jek’s Go-Pay was an early entrant in the space, while ShopeePay just had its license approved.

For some unicorns, their attempts at building their own e-wallets haven’t been as smooth sailing. Grab, for example, was unable to procure an e-money license from Indonesia’s central bank for its GrabPay system, which is in use in other markets. Neither could Tokopedia and Bukalapak.

Go-Jek’s acquisition of MVCommerce – which already had a license – made its path relatively easier. Meanwhile, travel unicorn Traveloka is the only one not to have a dedicated e-wallet, though it does offer fintech products like installments and “pay later” options.

The popular path forward seems to follow Go-Jek’s blueprint: either by partnering a licensed e-wallet (like Bukalapak with Dana) or taking the extra step and investing in said e-wallet (like Grab – reportedly – and Tokopedia with Ovo).

Ecommerce marketplaces have also joined forced with so-called “digital credit cards” like Kredivo and Akulaku for payments, although they operate somewhat differently compared to a typical e-wallet. There’s a credit element to these companies – they let users buy now, pay later, or pay off their ecommerce purchases in installments.

But if Ovo’s recent moves are an indication, there might be more synergy between ewallets and online lending companies. The company’s recent acquisition of P2P lending startup Taralite lets it extend loans and credit to shoppers and merchants in its ecosystem. Ovo has collaborated with the online lender Do-It and mutual funds marketplace Bareksa to offer mutual funds to users.

Go-Pay users can top up their balances through Go-Jek drivers. / Photo credit: Go-Jek

As far as market leaders go, Grab recently claimed that through its partnership with Ovo (and, by extension, Tokopedia), it is “part of the largest digital payments ecosystem in Indonesia.”

However, while Go-Jek has not provided market share figures for Go-Pay, it has suggested in the past that Go-Pay is “far ahead of the competition as Indonesia’s leading payments platform.”

Financial Times research from last year appears to confirm Go-Jek’s claim, as it shows that almost 75 percent of survey respondents named Go-Pay as the mobile payments service they use most often. Ovo was the second-most popular option, chosen by just over 40 percent of respondents.

Nonetheless, the battle seems to be far from over. Walk up to the cash register at many brick-and-mortar shops – especially the chain stores – and you’ll see signs from multiple players advertising their latest cashback promotions, with some offering up to 50 percent.

The fintech space is still relatively new, and understandably, there is still an appetite – or tolerance – for an all-out subsidy war. How long it will go on, however, is anybody’s guess. If how things turned out in both ride-hailing and ecommerce are any measure, then it probably won’t last forever. 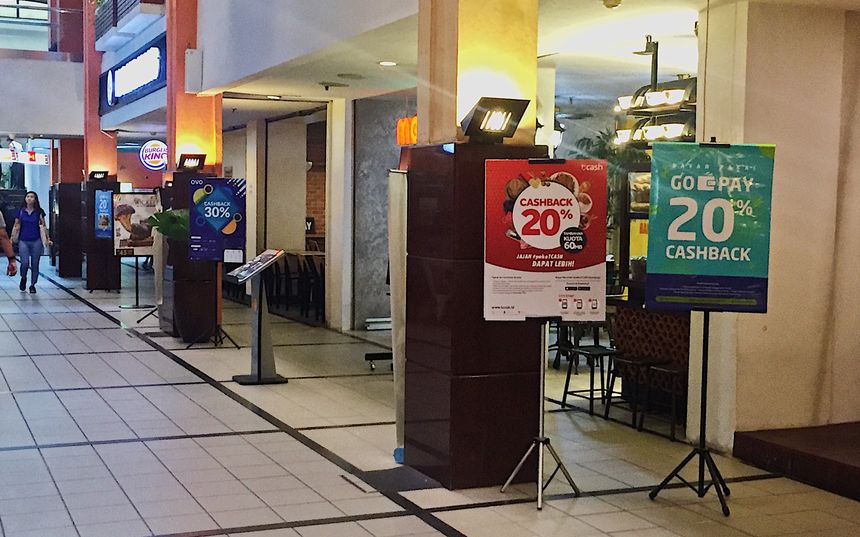