Gottfried Leibbrandt will step down next June from Swift, the cross-border payment system, after spending seven years leading a key piece of global economic infrastructure through crises from hacking to sanctions on Iranian banks.

The cooperative, owned by the world’s biggest banks, is starting a search for his replacement as chief executive officer. Liebbrandt notified the organization’s 25-member board of his departure Wednesday morning, he said in an interview in Brussels.

Swift, a messaging system that directs the flow of trillions of dollars between 10,000 institutions, was long a byword for clunky tech. Payments often took days to reach their destinations and were virtually impossible to track. Leibbrandt spearheaded efforts to modernize Swift and stiffen its defenses against crime, but also presided over a series of episodes that highlighted the 41-year-old system’s vulnerabilities.

“Swift is in very different shape than it was seven years ago,” said Leibbrandt, a 58-year-old onetime partner at McKinsey & Co. “There’s always going to be a time to hand over the reins and write a new chapter. I think this is indeed the right time.”

In 2016, Swift started requiring banks to install controls to better restrict access to their networks, detect potential fraud, and tell customers how their cyber-defenses performed when tested. This program was partly in response to a notorious incident.

In February 2016, cyberthieves stole $81 million by sending phony instructions via Swift to the Federal Reserve Bank of New York, requesting it send funds owned by the Bangladesh central bank to accounts located primarily in the Philippines.

Leibbrandt counterattacked three years ago by hiring hundreds of developers and launching a crash program to modernize. Not persuaded that blockchain was ready for prime time, Leibbrandt tapped established technology, such as protocols that make it easier for developers at different institutions to work together.

In 2017, Swift launched a product that lets member banks track payments in much the same way consumers follow FedEx packages. It’s now used in more than half of the millions of payments that utilize the network daily: instead of days, half the payments on Swift now reach their destination in about 30 minutes.

“This shows you can innovate as an incumbent,” said Leibbrandt, a Dutchman with a taste for understatement.

Yawar Shah, the chairman of Swift’s board, said he’s sorry to see Leibbrandt go. “I would have liked him to stay longer,” said Shah, a managing director in the institutional clients group at Citigroup Inc. “We have good momentum. At the same time, we have a strong bench.”

Leibbrandt said he is eyeing a return to consulting and writing academic papers on payments systems -- one of the hottest sectors in finance as online commerce booms.

The executive may be more sanguine leaving behind the political pressures facing Swift, which unlike the tech challenge, he had less scope to control.

Swift was caught in a diplomatic tug-of-war after President Trump decided to drop out of the accord to curb Iran’s nuclear program. The White House demanded Swift disconnect Iran’s central bank and other lenders -- as it did during an earlier period of sanctions -- even as a European law directed companies to preserve those ties.

Last month, Swift cut off the Iranian lenders “in the interests of global financial stability.” 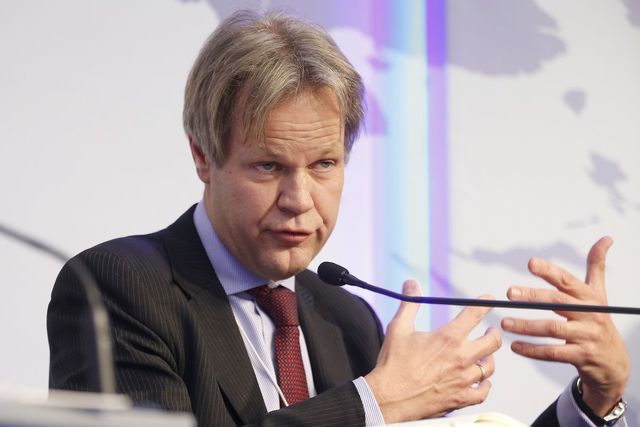