Piyush Gupta sees himself as uncomfortably close to the action in the battle between traditional banks and China’s insurgent fintech giants. The chief executive officer of Singapore’s DBS Group Holdings Ltd. has been trying to re-engineer his brick-and-mortar bank so that it operates more like a technology company, in order to give it a better chance in the struggle with Chinese online payment firms Tencent Holdings Ltd. and Ant Financial, owned by billionaire Jack Ma.

Both companies are targeting DBS’s core markets of Southeast Asia and India for expansion. “We are in the front line,” said Gupta, 58, who took over at DBS in 2009 after rising up the ranks at Citigroup Inc. DBS is more exposed than U.S. and European counterparts, because technology firms like Apple Inc. and Facebook Inc. have been slower than the Chinese to diversity into online finance, he said, adding that U.S. banks “could afford to be a little more sanguine.”

In contrast, Gupta is keenly aware of the massive transformation underway in China that’s changing how people spend, borrow and save, thanks to the rise of tech-savvy fintech startups over the past decade. Ant and Tencent have vast online payments businesses inside China, where they control 92 percent of the market. From 2012 through 2016, DBS invested about $3.5 billion upgrading its technology, including the development of its mobile payments app, known as DBS PayLah!, which has about 800,000 users in Singapore. It even recruited some 1,000 part-timers to go around the country’s famous hawker centers, purveyors of cheap but delicious street food, to try to get them to shun cash and go digital. In overseas markets like Indonesia, instead of buying a bank or adding branches, DBS is trying to grow its retail business in the same way as Ant and Tencent by rolling out digital payments services. “Our role model is a tech company,” Gupta said in an interview last week. “Because they are not burdened with a legacy. They basically came and re-imagined how banking could be done.”

Toward that end, DBS on May 8 launched a digital adviser called “Your Financial GPS,” now available to more than 2.5 million customers with the bank’s app. The service analyzes a customer’s bank account activity, categorizes expenses and offers tailored financial advice based on the individual’s budgets and financial goals. “It is a sensible product in the sense that banks would be well placed to integrate themselves into customers’ daily lives beyond banking, to the extent possible, and DBS isn’t the only bank hoping to do this,” said Kevin Kwek, an analyst at Sanford C. Bernstein. Fewer Branches As customers use less cash and turn to digital banking, the number of DBS branches in Singapore could come down by about 10 percent over the next five years, Gupta said.

The DBS chief was one of the first global banking CEOs to realize the importance of meeting the fintech challenge, according to Vikram Pandit, who used to be Gupta’s boss when he headed Citigroup, before leaving in 2012. “Piyush was an early proponent of using technology to serve more customers more efficiently,” said Pandit, who predicted last year that the advances in areas such as artificial intelligence and robotics will destroy about 30 percent of banking sector jobs over the next five years. “But it’s not just his ability to see the future of financial services that is important here, it is his methodical approach to leading and executing this digital transformation,” Pandit added. Jack Ma’s drive into Southeast Asia has included the $1 billion acquisition of Singapore-based e-commerce firm Lazada in 2016, which became a launchpad for Ant Financial’s Alipay service. Since then, Ant has partnered with companies in Thailand and Indonesia to provide payments services, and has invested a further $3 billion in Lazada.

Tencent, owned by billionaire Pony Ma, has invested in Go-Jek, an Indonesian ride-hailing firm which also has payments facilities. Future Model “The future model of banking is going to be different,” said Gupta. “You need to focus right now on transforming the company to cater to this future model. If you wind up spending a lot of capital and management bandwidth on what I think are things of the past, I am not sure that’s a smart thing to do.” Gupta credits his early recognition of the threat to his early days in Citigroup’s transaction banking division, unusual for a bank CEO, who tend to hail from the retail or investment banking arms of their institutions. That background taught him both the nuts and bolts of banking and the importance of technology, Gupta said. He also dabbled briefly but unsuccessfully in the startup world, when he quit Citigroup in 2001 to found an Internet portal in India, around the time the dotcom bubble was bursting. Another reason banks outside Asia were slower to react to the fintech menace was their preoccupation with boosting capital ratios after the financial crisis, Gupta said. “It wasn’t in their face, and the regulatory environment was a bit different,” he said. Many U.S. and European banks “were occupied with fighting the last war, which is the war of Basel, and capital and liquidity and so on,” and thus took longer to realize the threat from non-bank fintech firms. DBS’s digital ambitions have so far been good for the bank’s investors.

DBS shares have rallied for more than two years, turning it into Southeast Asia’s most-valuable firm. The digital strategy has helped lower the bank’s costs and boost its return on equity, projected to reach between 13 percent and 14 percent in the next five years. Gupta’s Caution Another benefit: DBS’s online banking is reeling in new customers. Last year, 80 percent of new small and medium-sized corporate clients in Singapore, and 37 percent of incoming wealth management customers, started their relationship digitally, DBS said in its 2017 annual report. But Gupta is the first to admit that all his preparations may not be enough to resist the Chinese and other locally grown fintech players like Grab, a ride-hailing firm which boasted of 4 million users in Singapore when it launched an e-wallet in Singapore last year. “I think it’s very hard to call the future,” Gupta said. Most companies would quote Mike Tyson, he added, on how everybody has a plan until they get punched in the face. “But you don’t know where the punch in the face is going to come from.” 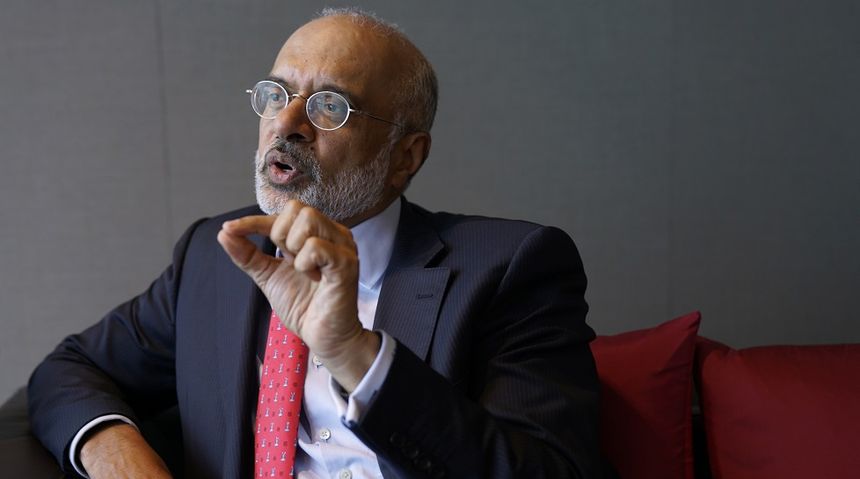