In recent months, taxis got them. Now stores and boutiques have them.

They’re all signs of a battle brewing in Hong Kong that will test whether a Western-style financial system -- based on banks, credit and debit cards -- can fend off a pair of apps that have come to dominate how people spend and send money throughout China. If Ant Financial’s Alipay and Tencent Holdings Ltd.’s WeChat Pay can expand into the city and win new customers there, why not in Europe and the U.S., too?

“It’s going to be a battleground here,” said James Lloyd, a Hong Kong-based fintech specialist at consultancy EY. “The next 12 to 24 months, we’re going to see a very significant shake-up of the consumer payments and retail banking market.”

The two payment apps flourished on the mainland by offering millions of people who were underserved by banks an easy way to store and use their money via mobile phone. By last year’s fourth quarter, payment apps handled 37.7 trillion yuan ($5.9 trillion) of spending in China, up 28 percent from just three months earlier, according to research firm Analysys International. Alipay handled 54 percent of that, followed by Tencent’s 38 percent.

Hong Kong, in contrast, already has a fully developed Western-style banking system, as well as a popular alternative, the reloadable Octopus card. The brightly colored cards are widely used for public transport and in convenience stores. Now, the apps from neighboring China are threatening to uproot that status quo.

While Alipay and WeChat Pay started their expansion abroad to ostensibly help Chinese travelers, the expectation across the financial industry is that the apps will use the infrastructure they build to attract locals next -- a patternthat’s starting to emerge.

In Hong Kong, there’s heavy pressure for vendors to accept the apps. People from the mainland accounted for 72 percent of overnight visitor spending in the city in 2017, doling out $16.5 billion while stocking up on cosmetics, luxury goods and other items, according to the tourism board. As merchants sign up, it opens the way for residents to participate too.

Note: Growth rates shown are compared with prior quarter

For decades, taxis in Hong Kong only accepted cash, though some began allowing payments through taxi-hailing apps. Alipay and WeChat Pay wooed drivers last year with a variety of incentives including cash rebates, and their logos soon began appearing in more cabs.

“Expanding our offering to ensure a more seamless experience for our users and merchants is one of our top priorities not only in Hong Kong, but right across southern China’s Greater Bay Area, and we will continue to look for opportunities,” Venetia Lee, general manager of Alipay Hong Kong, Macau and Taiwan, said in February. A Tencent spokeswoman declined to comment.

Octopus is fighting back. The card, used at least sometimes by 99 percent of the city’s residents, began posting so-called quick response, or QR, codes in cabs last year so riders can make mobile payments. More recently, it introduced an app for drivers, enabling their phones to directly scan customers’ cards.

The city’s de facto central bank is developing a digital-payment system that will connect with banks and stored valued cards such as Octopus. The program, called the Faster Payment System, is set to launch in September, letting people transfer Hong Kong dollars or China’s yuan with settlement in real time.

The brewing battle is being watched across borders. As tensions began mounting in November, a columnist for Hong Kong’s Apple Daily newspaper derided China’s payment apps, arguing they were of little use to creditworthy people in “civilized nations.” China’s state-run media quickly shot back: “Alipay users with high credibility are everywhere.”

There’s precedent for financial firms to be nervous. After conquering much of China, one of Ant Financial’s first international forays was in Southeast Asia, where it set out to win over some of the 450 million people with limited access to banking services. The firm set up partnerships in Thailand, Indonesia and the Philippines to offer services like money transfers and lending, and quickly gained traction.

DBS Group Holdings Ltd., Southeast Asia’s largest lender, has been racing to head off the apps, especially in its home market of Singapore. From 2012 through 2016, DBS plowed about $3.5 billion into upgrading its technology, including the development of its DBS PayLah! payments app, which has about 800,000 users in Singapore. The firm also has a big presence in Hong Kong.

“We are in the front line,” Chief Executive Officer Piyush Gupta said in an interview this month.

Thousands of miles away, U.S. banks are fortifying their own positions for the apps’ arrival. Last year, dozens of big U.S. lenders including JPMorgan Chase & Co. and Bank of America Corp. banded together to offer a new person-to-person payments app called Zelle. Credit card companies have sweetened rewards programs, hooking customers on perks that will make them think twice about using apps instead.

At the same time, Alipay has been inking deals with U.S. payment processors that will allow it to expand in America, ostensibly to help Chinese travelers. Late last year, its logos began appearing in New York City taxis. 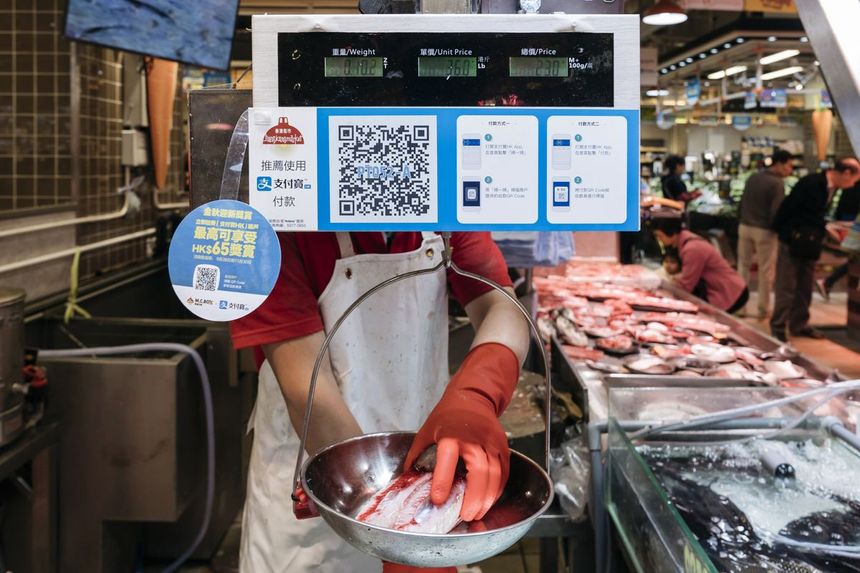