"We want to help Indonesian [tertiary-level] students to start becoming entrepreneurs as early as possible by offering access to loans, apart from our student loan products, to help them pay tuition fees," SBXbank Indonesia chief executive Syarif Hidayatullah said in a statement received by the Jakarta Globe on Friday (05/05).

BankMahasiswa.com is a digital lender that offers peer-to-peer lending. It has 50,000 tertiary-level students registered as active members.

Last week, Bank Mahasiswa Indonesia, the company behind the digital lender, signed a memorandum of understanding with SBXbank to support financial literacy in both traditional currency and cryptocurrency – alternative digital currency like Bitcoin.

SBXbank, which offers its services in the archipelago via Solarcity Kapital Indonesia, said the cooperation with BankMahasiswa.com is expected to help the company attract millennials and capture the financial technology market in the world's fourth-most populous nation.

Meanwhile, the deal with Garudayaksa will give SBXbank access to about 50,000 members of the cooperative and vice-versa, so both students and cooperative members will enjoy access to various services offered by SBXbank.

Syarif said BankMahasiswa.com will secure access to SBXbank's trading platform and become an exchanger of cryptocurrency trading via its SBXChange platform, a digital asset exchange for SBXCoin, the bank's cryptocurrency.

KGN chairman Sudaryono said the cooperative is interested in growing the cryptocurrency market in Indonesia as well as the country's fintech industry.

As previously reported, SBXbank plans to launch a unique marketplace called Coinxmart, which will allow for transactions in cryptocurrency.

Coinxmart is expected to seal a deal soon with a global luxury brand retail store, which will be one of the anchor merchants at Coinxmart.

SBXbank already has other operations in North America, Europe and parts of Asia. It has been offering SBXChange, a digital asset exchange for its SBXCoin, in those markets

The London-headquartered Smart Banking Exchange, better known as SBXbank, plans to inject up to Rp 100 billion ($7.5 million) into BankMahasiswa.com, a fintech startup focusing on loans to tertiary-level students 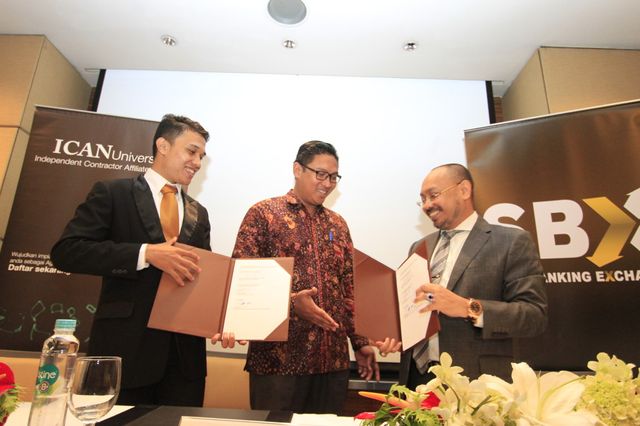